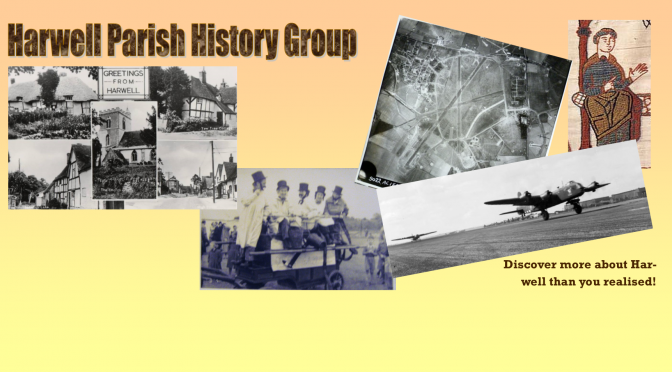 The Harwell Parish History Group had its inaugural meeting on 19th March 2013 in the Village Hall. The aim of the group is to collect, preserve and research evidence of Harwell’s history.

Harwell has a long and exceptionally rich history; the settlement was well established when the first three documents which mention it by name – 3 Saxon charters – were issued in 956, 973 and 985; therefore, the village is over 1,000 years old.  The existing impressive array of historical documents was used to produce in 1985 the booklet, “Harwell: Village for a Thousand Years” to celebrate this millennium. Harwell is recorded as three manors in Domesday Book, and produced the medieval statesman Bishop John of Harwell, the Elizabethan farmer Robert Loder- famed among economic historians for his extraordinarily complete accounts-, and a Lord Mayor of London, Christopher Smith. More recently, Harwellians have become well known artists, actors, footballers and members of the armed services. Tania Szabo, the daughter of World War II SOE hero Violette Szabo, lived here for a while with her grandparents and kindly gave a very well-received talk about her mother in October 2014.

In spite of the Great Fire of Harwell (1852), the village is rich in listed buildings.  For example, St. Matthew’s Church dates back to the eleventh century (possibly earlier), while there are houses constructed in the thirteenth and fourteenth centuries. The Geering Almshouses were built between 1732 and 1743.

In the last century, the siting of RAF Harwell and AERE have linked it with Operation Market Garden (Arnhem), D-Day and modern scientific developments. Until the 1990s, it was famed for its cherries. Since the 1990s Harwell Campus has become an integral and important component in the ‘Science Vale’, housing the Diamond light source, the UK’s national synchrotron, parts of the Rutherford Appleton Laboratory and the European Space Agency, amongst numerous other commercial scientific enterprises.

The Harwell Parish History Group are a small band of enthusiasts, currently hoping to attract more members.  We research all aspects of local history, run a popular series of evening talks (currently 6 per year) with our own and guest speakers, and maintain a permanent exhibition of posters of our research in the Heritage Centre/Village Hall foyer. These are on both local topics and topics related to national historical anniversaries. Since our foundation in 2013, we have mounted exhibitions on the general history of Harwell Village, Harwell in the Two World Wars, Three Key Anniversaries in Harwell’s History, and Harwell People Ancient and Modern. We are currently (late 2019) working on an exhibition in about 18 months’ time on Church, Chapel, Schools and Charities. We give talks to local groups, and, with the help of the village’s family historians, can help Harwellians past and present to research the history of their parish and families.

If you are interested in joining the group, or simply want to know more, please contact us on harwellhistorygroup@gmail.com

A venue for all in Harwell, Oxfordshire